**We traveled to Nicaragua in April of 2019. Still doing some back posting**

For the last month of our travels before spending some time stateside, we went to Nicaragua! Yes, there was recent political unrest starting April 2018 and we were going around the same time, one year later. We reached out to friends who currently live there, and friends who once lived there for advice about safety and they said we should go! Like all our travels, there is a risk, just like there is a risk being in the United States (looking at you, mass shootings. There have been 249 mass shootings just in 2019 alone).

Due to the political climate, many tourist shops and agencies were closed because tourism has drastically decreased since April 2018. Even with smaller amounts of touristic options, we enjoyed our time in Nicaragua. At this point, we were a little burnt out on traveling (that makes me feel like a brat for saying that). We had gotten to a point where we were saying “What’s another volcano?” “What’s another waterfall?”  and lacked the enthusiasm to take the energy and time to go explore it. For me, it had become more of a chore instead of excitement (FOMO is a true thing and I didn’t want to feel like I was missing out on something). Yet, through this trip, I’ve learned to say “yes” to things I want to do and “not right now” to things I don’t want to, knowing that I can always return.

Leon was so DAMN HOT. We visited during the hottest part of the year (mistake). AC was rare in Leon and I was so thankful for a cold shower. 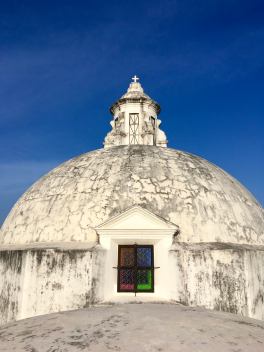 While in Leon, our friend Katie came to visit and we went volcano boarding! We climbed up the volcano with our “boards”, suited up in our sexy orange jumpsuits, and raced down the volcano side. 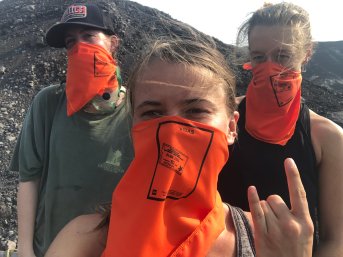 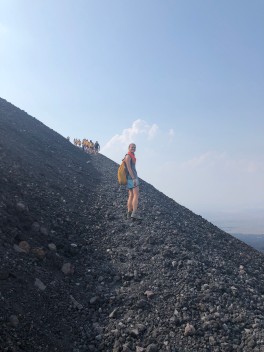 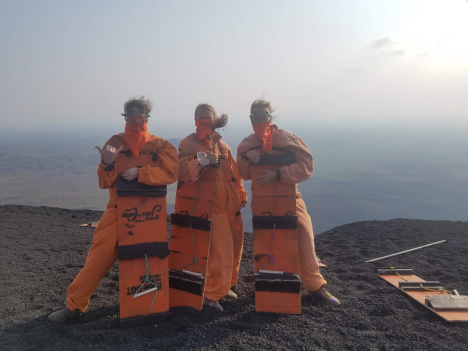 I won the slowest boarder (Claire’s Edit: OUT OF 25 PEOPLE) and got lots of water dumped on me. I clocked the incredible speed of 25 kilometers/hour.  By the end of the adventure, we had so much dirt trapped in every crevice of our bodies. Along with volcano boarding, Katie and I had a “treat yo self” day at the beach. It was quiet, with only a few people around.

While in Leon, we went to Spanish school! We were the only students there and Claire and I had two very different teachers. My teacher was very informed and formerly a history professor. Claire’s, not so much. Her teacher was a young man who interestingly enough was formerly a social worker! But decided he didn’t like it (understandable), so he became a Spanish teacher instead. The change was probably for the best. He was the biggest Donald Trump supporter we’ve met so far on our travels! He and Claire had lots to talk about. At one point, I hear Claire say “MIRA” very loudly, and I knew homeboy was in trouble. Our Spanish classes in Nicaragua made us really value so many of our awesome teachers who we’ve had along the way.

We also celebrated Easter in Leon. We went to the largest Catholic church in Central America and sat in the back, trying not to fall asleep because it was so hot and we didn’t understand more formal Spanish. 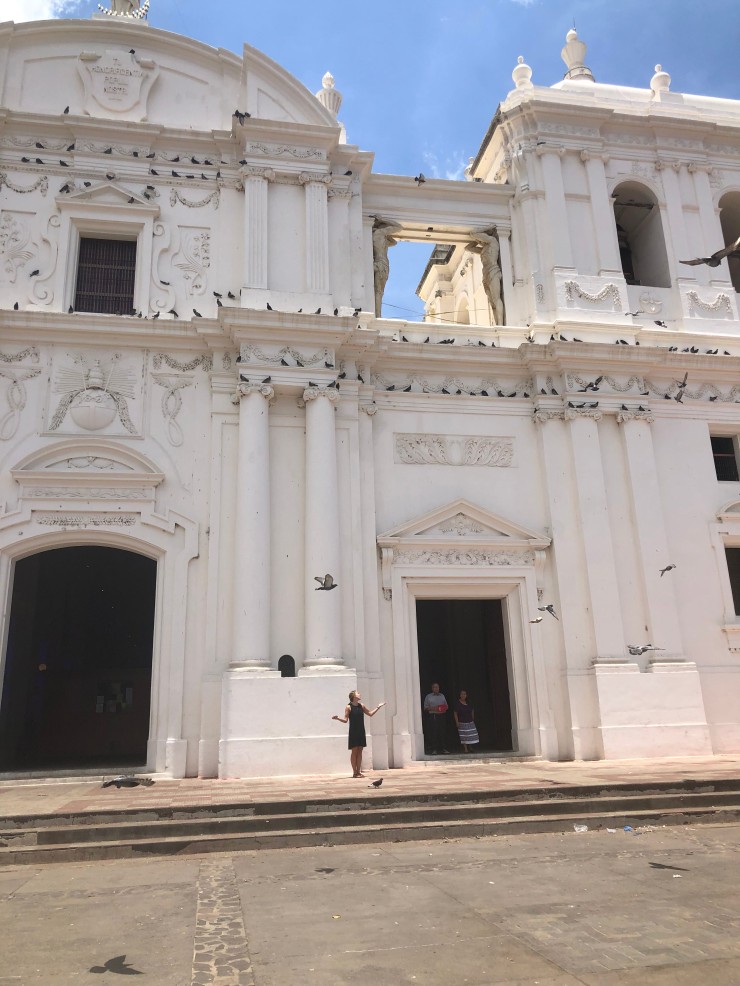 My favorite activity we did in Leon was a cooking class in a local family’s home! First, we went to the market and our guide made us haggle for better prices. I did feel a little resistant to doing this because we were arguing over a few cents and the country is so poor. As a traveler, I have wealth and a few cents isn’t going to break the bank. **I love a good bargain and love bartering for a good price, but the vendors were already giving us a good price, yet our guide wanted us to bargain more, that’s where I felt uneasy. We also learned that iguanas were used for cooking and sold in the market :((( Our cooking teacher was a nurse by trade, but because the hospitals had downsized (aka essentially closed) due to the policial unrest, she was out of a job and had to be creative in ways to provide for her two children and her partner. Sadly, we were the first tourists who had participated in the cooking class in an ENTIRE year. 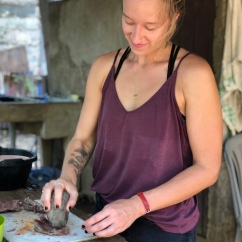 While in Leon, we had the scariest moment of the trip. At the hotel we were staying at, there was a domestic violence incident between two tourists. We woke up to a girl screaming for help in Spanish and English. People have a perception that Latin America is unsafe and violent. While there are unsafe parts (just like any city in the world), the scariest part of our trip was violence that was incited by a tourist. Domestic violence also takes place in every part of the world and affects every socioeconomic level. We didn’t have to leave the country to witness the effects.

Esteli is in the cowboy region of Nicaragua with lots of coffee farms and men in cowboys boots and hats. It was beautiful and a nice change from the heat we had come from, with fresh and crisp air. While in Esteli, we did a lot of hiking. While exploring the area, we went to a local’s house who carved pictures into rocks and placed them around his yard and Claire tried some fresh yogurt (read: FRESH) and cheese. 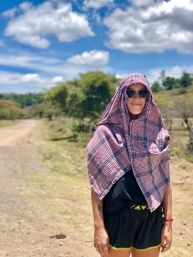 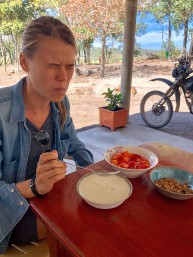 My favorite activity we did in Esteli was canyoning in a river that was 6 miles from the Honduran border. We hiked, jumped, and swam through the canyon. 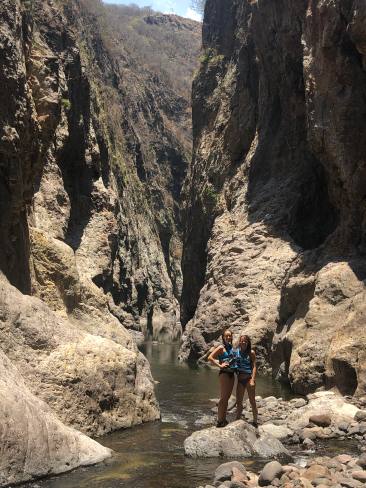 Our final city was San Juan del Sur, which is a small surf town in the southern part of Nicaragua, right on the Pacific. I really liked San Juan. It was on the beach, laidback, and still had local culture. Lots of the beach towns we’ve visited are so touristy, that many locals are driven out because of housing costs, and the town becomes full of overpriced restaurants and beach resorts. Many people market San Juan as a party town, yet one can escape that scene if they don’t want it.  We rented an Airbnb away from the main touristy area and really enjoyed it because we were surrounded by local Nica families.

We took a surf lesson and were impressed with the skills we retained, even though we hadn’t been surfing for a few months. Our surf instructor was patient and kind with us. The waves were manageable and made us feel like pros because we were able to surf them. I wish I could have spent more time in San Juan and plan on returning in the future. It’s affordable, has great food, and good surfing, especially for green surfers. It’s also easy to access from the airport which is a plus.

Like I mentioned at the beginning, we needed a break from traveling. I was craving a consistent bed, a shower with good water pressure, and time spent with my family and friends.  We returned stateside for some time, and planned on starting our journey to South America after some R&R! From September 2018-April 2019, we were able to visit all the countries in Central America, minus El Salvador. We still hope to visit El Salvador one day!